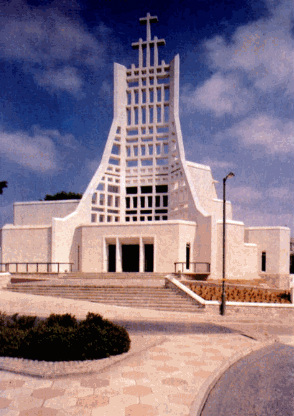 AN INTRODUCTION TO CENTRAL CHURCH TORQUAY

The striking high tower of Central Church, crowned with three crosses to signify the union of three churches, dominates the Torquay skyline and can be seen over a wide area. Built in 1976 it is a joint Methodist and United Reformed Church. With its multi-functional accommodation, it has become a busy centre for services, gatherings of all types, concerts and recitals. The congregation is cosmopolitan, coming as many do from other denominations, and all feel comfortable within its walls.

There is a broad base of worship – Sunday mornings start at 9.15am with our Rise and Shine Family Worship, a contemporary half hour service for All ages. Our 10.30am service is more traditional with our gowned choir in attendance every week.  The third Sunday evening service each month is a Cafe Church, and there are midweek services/communion and prayers for healing. There are also House Groups. We actively support local community groups, such as food banks. In addition, regular meetings of a variety of organisations, Guild, Beavers & Cubs, Guides & Brownies, a Flexercise group, a Badminton Club, Belleplates and a lively social life complete the picture. 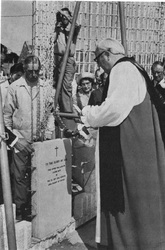 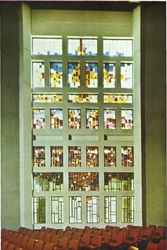 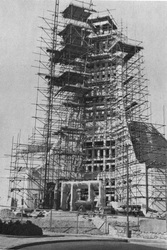 THE HISTORY OF CENTRAL CHURCH

It was in 1971 that the leaders of the three churches began seriously to discuss the possibility of uniting. It was proposed to sell the two Methodist churches and demolish Belgrave and erect a new building on this valuable site, suitable for present day needs. Draft proposals and constitution were brought to the church members and agreed in their own churches first and then a united meeting was held and the final decision almost unanimously passed. During the winter of 1973 united evening services were held to enable the congregations to become better acquainted with each other's form of worship. Edward Narracott, Tanner and André were appointed architects in December 1971 and when their plans had been accepted by all concerned the sale of Union Street Church could proceed. The auction took place in January 1973 and the building was sold to "Mothercare". Tenders were invited for the construction of the new building. That of Currall, Lewis and Martin Ltd. of Birmingham was accepted. Money for furnishings is being provided by church organisations and individuals in a variety of ways. The ecumenical spirit was further strengthened when Tor Parochial Church Council offered the use of St. Saviour's Church until the new premises were ready, an offer which was gratefully accepted, and the friendship was deepened further when the Bishop of Exeter laid the foundation stone in June 1975. 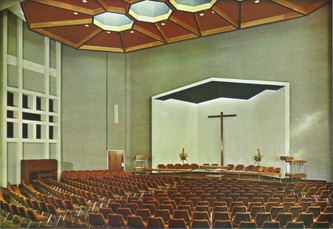 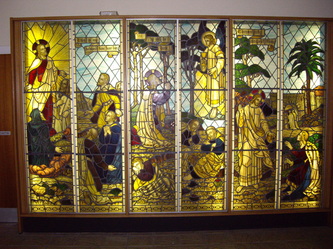 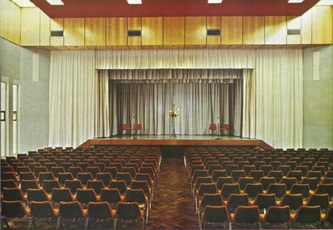 The Church is designed on an elongated octagonal plan and will seat 350 with a sliding partition connecting to the Hall which seats a further 350. This section is surrounded by all other rooms to obviate traffic noise. These rooms consist of vestry, treasury, choir room and four meeting rooms, with a youth centre with disco at basement level. A three-bedroomed caretaker's flat forms the roof of the covered car park. The Hall is high enough to be used for championship badminton. Each section is independent so any one part can be closed off to allow different activities to carry on without inconvenience to each other.

External walls rise off a podium of limestone recovered from the walls of Belgrave; all external facings are in white precast fluted stone. A special feature is the "screen to the clouds", consisting of white tracery surrounding multi-coloured glass for interior lighting and above the building itself open tracery rising to thirty metres and terminating in twin crosses surmounted by a single cross to symbolise the uniting of the two churches in Christ. The lancet-shaped windows in bronzed aluminium frames are directed away from high noise levels. All external maintenance is cut to an absolute minimum.

The Church and Hall are decorated to conform so they can be seen as a whole when used together; the walls are dove grey, ceilings cherry red in white surrounds, that of the church has additional beech ribs. The floor is deep brown wood block; the dais of the church is carpeted in olive green. The stage is surrounded by oatmeal curtaining. All fittings throughout have been designed by the architects using mostly mahogany and stainless steel.

The glazing of the Church is in thick multi-coloured glass depicting the Seven Ages of Man, and designed by Peter Tysoe.

In the entrance hall are three lancet stained glass windows from Belgrave set in a frame made of oak from Union Street.

The seating consists of linked chairs upholstered in blue coloured fabric and designed by Robin Day.

The organ is a four manual electrostatic with movable console built by Compton-Makin.

The choir is robed in red purple gowns made by The House of Van Heems Ltd., London.

The Cross above the Communion Table is the gift of the architect. 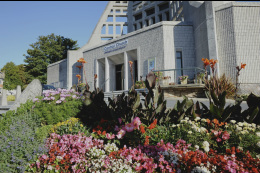 Outside, the surrounds to the building are laid out with specimen trees in grassed areas with small beds for annual flowers and certain low roofs at the rear are planted with shrubs in natural soil. 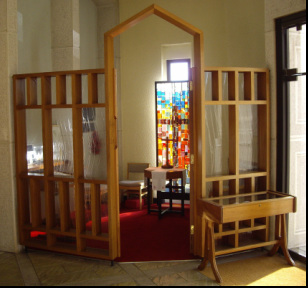 THE CHAPEL OF UNITY

A unique feature of the building is the inclusion of the small Prayer Chapel at the right-hand side of the vestibule. It is the sign to all who enter, for any purpose, that this is first and foremost a house of prayer.

The Chapel will be available for private and communal prayer at all times by those who desire to deepen their own spiritual life and that of the whole fellowship of this congregation. But, above all, it is a Chapel of Unity, dedicated to the bringing together of the whole people of God; and all Christian communions are invited to use it as the common ground where they can meet together before God. To this end other Churches have been invited to include gifts for the Chapel which express some aspect of their tradition, and to place in it a book of prayer used among their own people.

The coloured glass screen and other furnishings have been donated anonymously by those who wished to commemorate the set-vice given to the Church by family members for more than a century.
_ We offer this Chapel with the prayer that our Lord will grant to His Church on earth "that peace and unity which were in his mind and purpose when, on the eve of his passion, he prayed that all might be one".
Brief history of how three churches came together to build a new Church

Central
The following tells, quite briefly, the story of four Churches. Three of them, with a tradition in each case extending back for over a century, have been demolished, and the Methodist and United Reformed Congregations have joined to build the new Church ... Central. In this way they have sought to express gratitude for the past by seeking to put the future in debt to themselves.

During the demolition of one of the Churches a bottle was found under the front wall of the building which had survived a disastrous fire in 1926. Amongst other contents was found a poem composed for the stonelaying in November 1877. What it expresses would also seem to be the aim for our new Church a century later.

"These Foundation Stones to God's glory we lay, And trust that this Building for ages shall stay; May the Truth there be preached, and sinners be blest, When we who now near it are gone to our rest."

In 1788 Edward and John Henley of Barton travelled to Exeter to hear John Wesley and were inspired to preach Methodism from a room in George Street, Torquay. Later Edward and his wife Mary held services in their home in Swan Street. In 1807 two cottages were acquired in Fleet Street and became the Chapel in the Meadow. In 1853 a chapel was built in Rock Road and in 1858 the Rock Road Schoolroom was constructed to house the Sunday School originally started in 1806 by an Anglican and taken over by Mary Henley in 1814. A site was purchased in Union Street to provide a larger Church and Schoolroom and in 1876 and 1877 the foundations of the new Wesleyan Schoolroom and Church were laid. The Schoolroom opened in 1878 and the Church in 1879; it cost £6,000 to build. The organ was installed in 1882. In 1926 a fire gutted the building but, undeterred, the congregation reconstructed the Church which was reopened in 1928. During the 1960's the Trustees considered ways to cope with rising costs and dwindling congregations and actually approached a development firm with the idea of building shops on the Union Street site with a church above. This proved abortive and instead the Union Street and Belgrave congregations entered into conversation with a view to uniting for common worship and mission.
© Central Church, Torquay 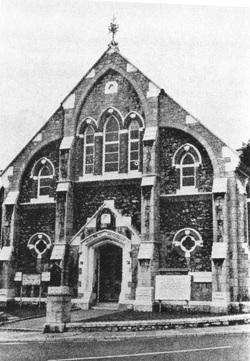 _During the 1850's a company of people held services in Lower Union Street according to the order of worship of the Primitive Methodists. They purchased the former Baptist Chapel in Temperance Street for £650 in 1863. The congregation then bought a large house in Market Street and demolished it to make way for a chapel. The foundation stones were laid in 1877 and the church opened in early 1878, having cost £2,500 and been built by Mr. W. A. Goss. Ancillary rooms were added and improvements made as funds permitted. By the 1970's the structure of Market Street Church was giving the congregation much concern. Dry rot was discovered in many of the timbers and the heating system was suspect. The choice lay between spending a large sum on the building or joining with Union Street Methodist. It was finally agreed to join with Union Street and Belgrave in discussing the possibility of a new Church combining the three congregations. The failure of the heating system in the middle of winter precipitated the final abandonment of the church building in 1973; subsequently the building was sold for £55,000 and this, together with the sum realized from the sale of Union Street, was invested in the Methodist Circuit Advance Fund. From this, money was made available for building the new Central Church, and grants made to churches in the Torquay and Paignton Circuit, and also to Totnes and Brixham.
© Central Church, Torquay 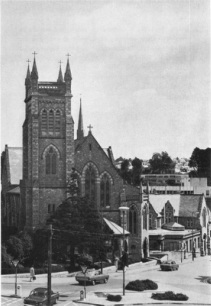 _In the Autumn of 1866 Mr. Joshua Wilson of Tunbridge Wells came to Torquay on a visit. He was appalled at the lack of Nonconformist witness in Torre and started a subscription list with the view to erecting a church. The response encouraged him to purchase a plot of land in Belgrave Road and erect a temporary chapel in 1867 which became a Congregational Church. In 1869 the foundations were laid of a permanent church in Tor Hill Road and in 1870 the new church was opened, built by Mr. Matchum to the design of Mr. J. W. Rowell at a cost of £5,920 including the organ. In 1942 Belgrave suffered considerable bomb blast, it was restored between 1947 and 1951 although structural scars remained which began to give trouble in the 1960's and decided the congregation to consider a more modern building, and a development company actually was consulted. It was at this juncture that conversations took place with the members of Union Street and Market Street with a view to combining in a scheme to build a new church.

Belgrave became a United Reformed Church under the new Act of 1972.
© Central Church, Torquay
Powered by